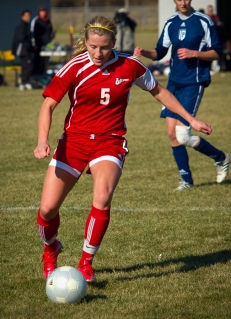 The University of Winnipeg Wesmen won convincing games in both men’s and women’s soccer last week, but none were bigger than the 9-1 dismantling of Providence University College Freemen by the women’s squad. Behind that win was striker Sheri Hince, a 21-year-old in her second year of study, who had four goals in Wednesday’s win, catapulting her to the top female goal scorer in the MCAC in just one game. Hince has had soccer experience outside of Canada, playing for the University of Central Florida (UCF) for one year in 2009. She played there on a full athletic scholarship, and her UCF Knights were ranked as high as #16 in NCAA Division I women’s soccer. The Wesmen will now take their 1-0 record to Red River College’s Notre Dame fields, as they will play an originally postponed match on Tuesday, September 27th against the Rebels.