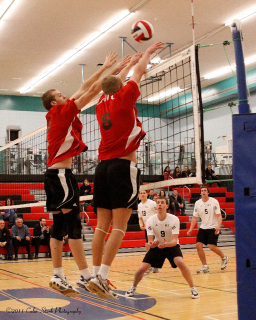 It wasn’t much of a contest in Friday night’s last semifinal at 8 p.m. when the 3-time defending MCAC champion and #1 ranked Red River College Rebels faced off against the #4 ranked Assiniboine Community College Cougars.

RRC came out fast, taking early and large leads in all three sets as they displayed a clear superiority over their outmatched opponents from Brandon.

“I think we have to stay focused,” said Rebel head coach Dan Gilbert following his team’s victory. “We need to realize that CMU is a team that is going to be coming into the game with something to prove.”