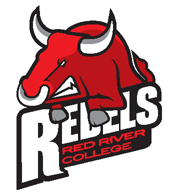 Thursday night in front of a crowd of over 200 at Red River College, the top teams in men’s and women’s MCAC basketball squared off in a preview of what is likely to be the two conference championship games.

The women’s game was close most the way, but Red River pulled away late and won 63-46. Rebels’ second year guard Tia Ruddock led the way with 22 points.

The men’s game was a back-and-forth battle that saw the two squads tied at 64 at the end of regulation. After a five minute foul-filled overtime, Red River prevailed 72-70 in front of an exuberant crowd. The win leapfrogged the Rebels past the College Wesmen for sole possession of first in the men’s conference standings.

The teams will meet again on Saturday, February 12 at Red River’s North Gym to determine the top seeds heading into the 2011 MCAC Final 4 Basketball Championships. The women’s game is at 2:00 p.m. followed by the men at 3:30 p.m.

The 2011 men’s and women’s conference championships will take place at Providence College March 11 and 12. Head coach Sukh Singh and the Rebel men will be seeking a third consecutive MCAC title this year.