When the Canadian Mennonite University Blazers men’s basketball team travelled down to Bimidji, Minnesota in late January to take on the Oak Hills Christian College WolfPack, MCAC history was made.
Wyatt Anders, a 6’7” freshman forward, put up the most impressive individual basketball stat line since the formation of the Manitoba Colleges Athletic Conference.
The 19-year-old amassed 47 points and 21 rebounds, including 9 on the offensive glass in CMU’s 95-81 victory that leapfrogged the Blazers over the WolfPack in the conference standings. Anders was deadly consistent on the afternoon, going 18/22 from the field, and 11/12 from the line.
“I did have a size advantage, and I felt good during the game,” said Anders. “In our half-court offense, we worked the ball around and tried to get it inside to me.
Oak Hills boasts a young team of mainly freshman who rely on a speed driven fast-break offence and pressure defence.
“I don’t quite remember the numbers,” said the humble Sturgeon Heights Collegiate grad. “With our shortage of guys I got in almost a full game.”
Anders, who is an assistant coach for the Sturgeon Heights varsity basketball team, had an impressive game the night before against Oak Hills. He put up 23 points and 14 rebounds in the Blazers 74-55 win.
“To me, it’s not about the stats,” said Anders. “It’s about playing good basketball and winning games.” 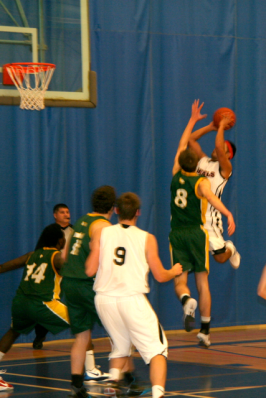 The Blazers, who currently sit in third-place behind Red River College and the University of Winnipeg, will attempt to make a third consecutive appearance in the conference championship game. They have not won a men’s basketball title since 2008.

The 2011 MCAC Final 4 Basketball Championships will take place at Providence College in Otterburne, Manitoba on March 11 and 12.