Kampen is a former CIS athlete
With the absence of the Blazers’ most-potent offensive weapon in Clare Schellenberg who is out with a knee injury suffered during the Adidas Cup in Oshawa, fourth-year left-side Evelyn Kampen has had to step up her game.
“She’s been very consistent for us,” said head coach Andrea Charbonneau of the 21-year-old River East Collegiate product. “We’ve definitely been suffering through a few injuries, but she’s been consistent all around for us. She’s a player we needed before Christmas, and now.”
Kampen, who was named the MCAC’s most valuable female volleyball player last season, put up 17 kills against second-place Red River College in the Blazers’ 3-0 win (25-14, 25-10, 25-19) on January 21. The Blazers also won the rematch the following night 3-0 (25-17, 26-24, 25-17), putting them at a perfect 10-0 on the season.
Before coming to Canadian Mennonite University at the beginning of last season, the 5’10” communications student spent two seasons with the Trinity Western University Spartans in the Canada West Division of CIS.
“We definitely look to her in key situations… especially with certain plays,” said Charbonneau. “She has the athletic ability and experience to run those plays, like the thirty-one.”

“It’s definitely been kind of up and down since (Schellenberg) has been out,” said Kampen. “It kind of threw our team for a loop, especially while in Ontario. So, I definitely feel like that role of having to take our team to a point where we can just focus in again and know what we need to do the rest of the season.” 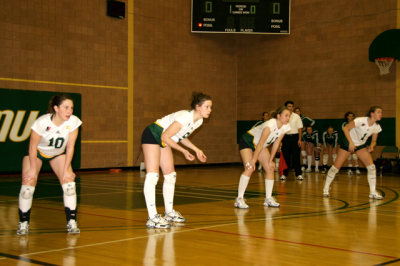 When asked if she feels greater responsibility being the “go-to” outside hitter, Kampen displayed her established maturity and team leadership.

“No, I don’t feel the pressure because I know our team is there to hold it together. We have such a strong support system. Everyone that goes in does such a great job.”

The Blazers will be seeking their third-consecutive MCAC crown in just over three weeks when Red River College hosts the 2011 Final 4 Volleyball Championships on March 4 and 5.