Wheeler shows vision with & without the ball
Although she didn’t find the score sheet in her team’s 10-0 win over the defending MCAC Champion Canadian Mennonite University Blazers, University of Winnipeg forward Brittany Wheeler did enough on the pitch to ensure a Wesmen victory on October 10. She also earned some of the highest praise a player could ask for from her coach.
“She’s got a fantastic touch,” said Wesmen head coach Stacey Boudreau.
“Her intensity is always high. She plays at that high level – it doesn’t matter what competition we’re playing against, she doesn’t play down. She always plays her game.” Boudreau went on at length about the 18-year-old Garden City Collegiate graduate who is now studying Criminal Justice.

The forward is extremely effective in ball distribution, helping the Wesmen score 42 goals through four regular season games
“(She has) excellent vision, always finding the space for herself on the field, which opens up opportunities for the other players. That’s off the ball. When she has the ball she’s able to do that as well. Even if it’s in the middle of the field, or down closer to the net she will often times pull the ball back. This changes the entire flow, and by doing that she’s opened up space to create either passes or a scoring opportunity for herself. She’s just consistent.” 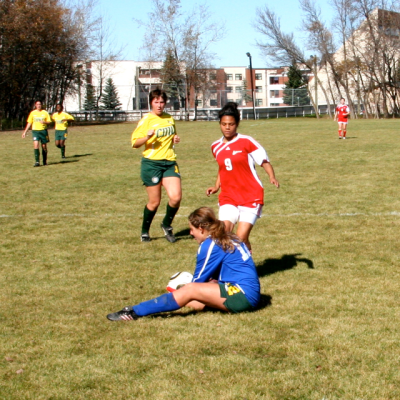 Wheeler and the rest of the Wesmen recently completed a perfect 4-0 regular season, capturing the #1 seed in the conference’s women’s soccer rankings heading into the 2010 MCAC Soccer Championships at Providence College in Otterburne, MB. The Wesmen were awarded a bye to the championship final which is slated for Sunday, October 24 at 1:00 p.m.