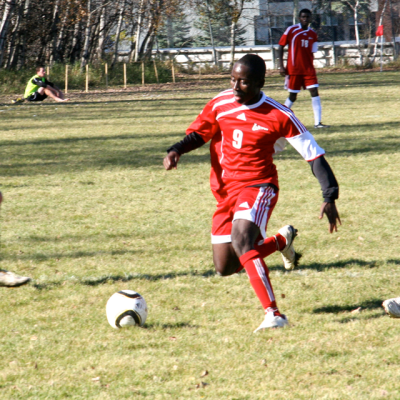 Ganyea is among the league leaders in scoring
After a 30-year absence, the University of Winnipeg once again has a men’s soccer program. Striker Amos Ganyea is one reason why the 2010 Wesmen soccer season will be a memorable one, even more so than simply returning to competition after three decades.
The former U17 Canadian National Team member found the net twice for the Wesmen in their 5-nil win over the Canadian Mennonite University Blazers on October 2. Ganyea, who moved to Canada from Ghana in 2005, graduated from Kelvin High School in 2008. Later, he moved to Alberta to suit up for the Lakeland College Rustlers. It too was Lakeland’s first season in men’s soccer competition. 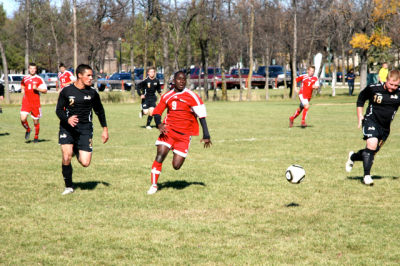 Ganyea split the Blazer defense often, creating several quality chances
The 18-year-old displays utter seriousness on his face as he speaks of his head coach’s on-field strategy.
“We control the ball. It’s our kind of game we play. Coach (Mick Gale) stresses keeping possession of the ball. We want to make the other team come in. Once they come deep, we can play behind them. We have to be patient and disciplined.” 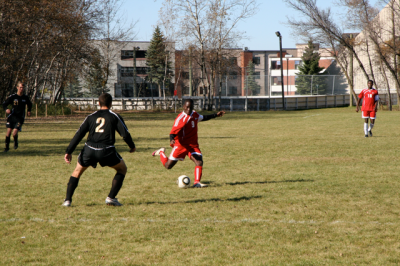 Gale’s strategy seems to be working. The Wesmen remain atop the conference standings with only a couple of weeks remaining in the season before the MCAC Soccer Championships take place October 23 and 24 at Providence College in Otterburne, Manitoba 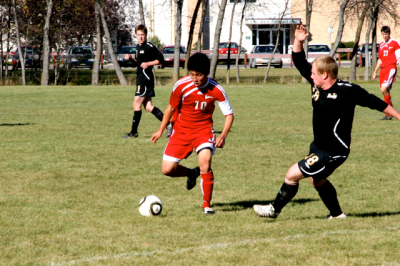