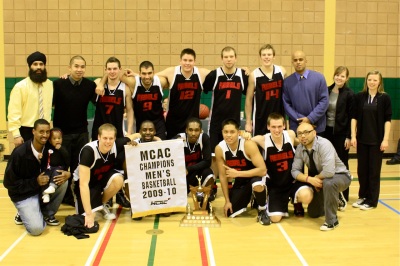 It was a heartbreaking end to a highly successful MCAC season for the #1 ranked CMU men’s basketball team on Saturday night. The Blazers witnessed Red River take the men’s semifinal convincingly on Friday night over the #3 ranked Providence College Freemen, advancing them to Saturday’s championship final – a rematch of last years title game. The resulting basketball rivalry between the Blazers and the Rebels has been dubbed the ‘Crosstown Showdown.’

Without the services of 2010 Regular Season Most Valuable Player Josh Olaes due to family commitments, the Rebels entered Saturday’s final against their rivals as decided underdogs.

“When important guys are missing from your lineup, it becomes an opportunity for someone else to step up”, said Rebels Head Coach Sukh Singh, and third-year forward Josh Stolar did just that.

The Stonewall, MB native was an absolute monster on the glass, racking up 9 rebounds to compliment his 21 points. He also hit a buzzer-beating 3-pointer on a broken play to end the first half.

Shooting guard Brad Naron also rose to the occasion for the Rebels. The 6’1 ‘deep-threat’ also nailed a off balance buzzer-beating three at the end of the third, taking the wind completely out of CMU’s sails.
Neither team led by more than seven points at any time during the game, and it was only in the final five minutes that the Rebels took control.

It would be those two timely three-pointers that would prove the difference, as the Rebels held on for a 70-65 win to claim their second consecutive conference crown.

Fourth-year forward Paul Muns led all CMU scorers with 18 points and was selected the Blazers’ player of the game, but the MCAC’s regular season scoring leader had difficulty finding open shots.

The Rebels defense also did an amazing job thwarting point guard and fast-break scoring threat Kevin Quirante. The rookie lightning bolt, who was selected to the all-conference team, found few opportunities to get behind Red River for his signature run-and-gun scoring.

The Rebels’ Stolar was named the Finals’ Most Valuable Player. He compiled 39 points and 23 rebounds over his team’s two games.