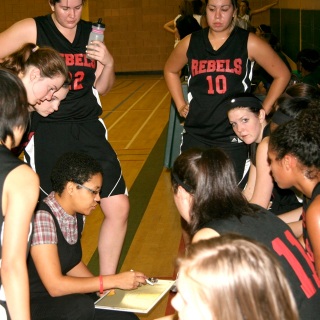 Karie Magpantay is a strong and talented 5’10” forward with the Red River College women’s basketball team. The 21-year-old joint baccalaureate nursing student is in her first season with the defending MCAC champion Rebels, and has been a welcome addition to a team whose talent in the paint has been depleted with this season’s departure of long-time Rebels Julia Anning and Shaylyn Stutsky.

In Red River’s recent victory over Canadian Mennonite University on November 14, Magpantay absolutely dominated the Blazers on the offensive and defensive glass. Trailing by 11 heading into the fourth quarter, Magpantay’s rebounding allowed the Rebels multiple opportunities to narrow the Blazer lead. And indeed, the Rebels did just that, amassing a stellar 29 points in the final frame of their come from behind 65-62 victory.

“We’ve talked about (rebounds) as a big reason why they beat us,” said Rebels assistant coach Danica Reimer. “She stepped up and got a lot of the boards for us.”

The Rebels’ win evens the season series between the two teams at 1-1, with both squads finding success on the other’s court in the early stages of the season. The two will see their third conference meeting after the Christmas break when Red River will once again visit Canadian Mennonite University on January 29.