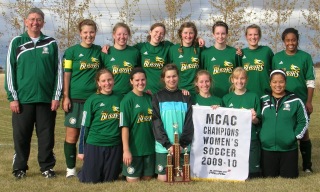 Otterburne, MB – It was a Sunday showdown for all the marbles. The 2009 MCAC women’s soccer championship featured the Providence College Freemen and the Canadian Mennonite University Blazers. The Freemen came into the game the favorite after taking three of the four match-ups between the two teams in the regular season. In the end however, it was CMU who overcame the odds to take home the Manitoba Colleges Athletic Conference Championship banner.

The Freemen started out strong, earning the majority of scoring chances early on. After hitting the crossbar on their first two shots on goal, midfielder Amanda Franz made the most of the team’s third chance by putting one by CMU’s all-conference goalkeeper Mikaela Villalobos late in the first half. They continued to pressure the Blazers defense, but remained unable to capitalize again before the half ended.

Providence continued their strong possession game in the second half, but it was Canadian Mennonite who was able to even the score as they chipped a goal over freshman keeper Alyssa Coutts to tie the game at one. CMU continued their opportunistic play, converting a free kick from just outside the penalty area to take a 2-1 lead.

The match then saw a highly controversial call. A penalty shot was awarded to CMU on a play where a Providence defender and a Blazers forward fought for the ball while both remained on their feet and mobile. CMU was sure to make their opportunity count when they had it, burying the penalty shot to go up by two.

However, later in the second half, the Freemen were awarded a penalty shot of their own. Freshman all-conference selection Melanie Warkentine put the penalty kick away, bringing her team within one. The Freemen continued to apply pressure and create opportunities, but were unable to find the equalizer. At the final whistle, the underdog CMU Blazers found themselves leading 3-2, capturing their first MCAC conference title.

While out shooting Canadian Mennonite 14-5 while creating many potential scoring opportunities, Freemen head coach Emily Janke remained happy with her team’s performance. She felt as though her girls gave a title deserving performance.

“I’m very proud of the way the girls played today,” said Janke. “They created so many chances for themselves and out played CMU the entire game. They just couldn’t catch a break the entire game. I don’t think the final 3-2 result of the game reflects the game at all because Providence really was the better team on the field.”

The ‘player of the game’ award was given to freshman CMU defender Gena Giesbrecht, after displaying a phenomenal defensive performance.