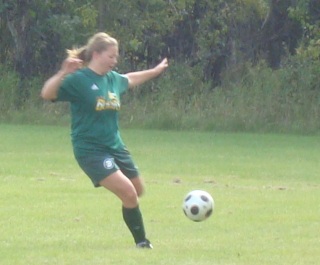 Second half goals by Maraleigh Short and Felecia Schmutz lifted Canadian Mennonite University to their first win of the 2009 MCAC soccer season; a 2-0 victory over Providence College on Saturday afternoon.

Last week in Otterburne, it was the Freemen who were victorious, finding themselves on the winning side of a 5 – 0 score. Their 2 – 0 win over Providence marks a significant accomplishment for the Blazers as they captured their first victory in the past two seasons.

Short opened the scoring early in the first half when her header powered past Freemen goalkeeper Alissa Coutts. It was the first CMU goal since their season opener, when Providence visited the Blazers on September 16. It wouldn’t take long for CMU to score their second as first year center-forward Felecia Schmutz lifted the home team to a 2 – 0 lead.

“I am so proud of these ladies”, said CMU head coach William Wiens with a smile. “We have been improving practice by practice and we were all expecting to get something out of this game.”

The win puts the Blazers only three points behind Providence in the conference standings, and sets up an exciting final meeting in Otterburne on October 17.

An interesting side note – CMU goalkeeper Mikaela Villalobos has now recorded a clean sheet in each of the Blazers last two matches.